With this post, I’m declaring the August 2014 blogathon over. I could probably try to squeeze in another hasty post, but you know what? It’s vacation, I’m in Moab, and it’s time to finish things up.

Naturally, I want to take a look at how this crazy experiment turned out.

Obviously, I didn’t make it to 25 posts. I’m, of course, slightly disappointed in myself, as I’m sure you are too. The goal was to crank out almost a post a day, and I didn’t meet that.

But I did get almost there. Including this post, I wrote 19 blog entries in the month of August.[ref]Actually, I wrote more than that, if you include Spamalytics and On Decisions. I didn’t consider them Blogathon posts, for some reason that only makes sense so long as I don’t try to explain it, but if you include them, that brings the total up even higher, to 21.[/ref] That is huge. If you count back 19 posts from when I began the blogathon, it puts you two years ago, in the summer of 2012. I hadn’t even begun my senior year of college.

What’s more, I wrote over 20,000 words this month. Last November, when I tried NaNoWriMo, I barely made it to 5,000 before stagnating. Over the course of Blogathon 2014, not only did I write four times as much, I also kept going even until the end. I’m proud of that, and I think I have a right to be.

No, I didn’t meet the goal I set for myself. But I wrote 19 posts, which is more than a post every two days. Blogathon 2014 drew nearly 700 visits to my site, and almost 500 new users. Most importantly for me, I wrote. I blogged and blogged and blogged, a process that made my blog feel more like my own than anything I’ve done in years.

At the end of the day, I don’t think the goal really was to write 25 posts. I mean, that’s what I said, but my motivation was slightly different. I wanted to write, first and foremost, and hoped that in doing so, I would shake off my reluctance to share things here. By that metric, Blogathon 2014  was a smashing success. The process of starting a new draft seems remarkably natural to me now–I don’t sit here wondering if what I want to write is worth sharing. It’s my blog. If I want to say it here, I can.

I’m incredibly pleased with that.

One thing I’m exceptionally proud of from this month is my artwork. I take great joy in illustrating my posts, ad although I’d started doing this in earnest a little bit before the blogathon, the month gave me numerous opportunities to continue this trend and draw fun things for my posts. 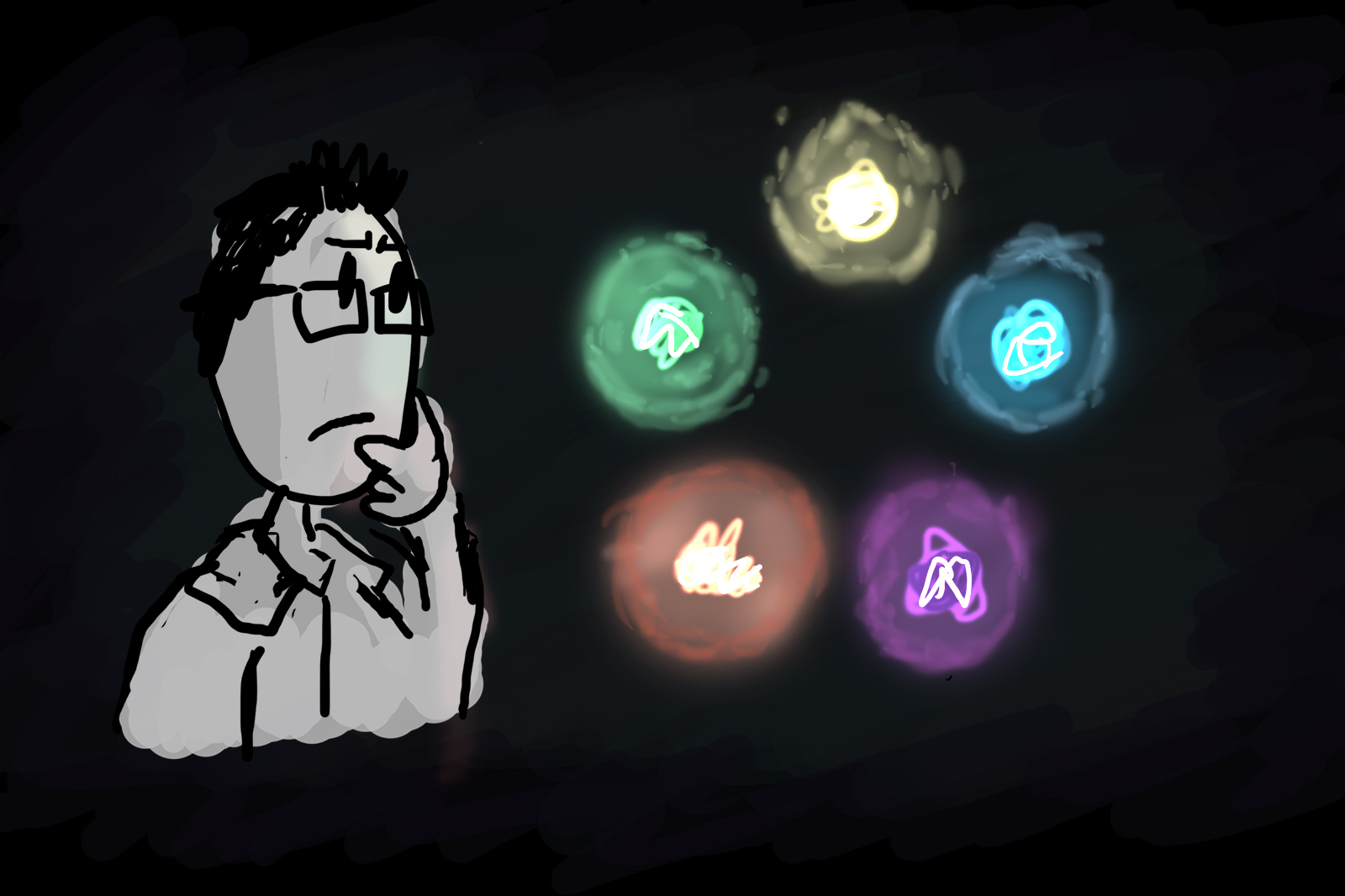 Originally, my plan for Blogathon 2014 was to stick to really simple, functional illustrations. Hooking up my tablet and drawing illustrations takes a while, and I predicted (correctly) that if I tried to carefully illustrate every post, it would slow me down immensely. If you look back over the Blogathon 2014 posts, you’ll see this–I cut a lot of corners, using photos and black-and-white drawings when I could, instead of drawing new things.

But  I didn’t always manage to stick to this goal. When I was illustrating for Post #2, The Colors of Magic, I had an idea of an illustration, and I just couldn’t pass it up. In particular, I wanted to take the opportunity to try a new digital painting technique to make things–in this case, the five glowing orbs of mana–really appear to pop and glow.

I didn’t spend much time on the cartoon of myself, but when it came to the orbs, I spent probably an hour or more getting them just right. I was expecting them to look out of place in contrast with the sketchy background and slap-dash figure, but somehow, the whole thing ended up as one of my favorite illustrations from the month, and I actually think all of that post looks really damn good.

This was the header image for Post #6, Traveling Without a Map, and I’m equally pleased with it. I hardly ever do digital painting, instead preferring to sketch, outline, and ink images as if they’re comic book pages, so I’m quite new to the process of building up color and using things like contrast, rather than bold outlines, to establish shape. I still have a long way to go with it, but I’m happy with the suggestive, impressionistic style of this image.

This is just damn clever.

This one was fun for a couple of reasons. First, it was the first drawing I’d ever tried with a deliberately limited color palette. I wanted to try to evoke that retro, ’50s-ish look, and for some reason, using a blue-orange palette seemed like a good way to do that. I’m super-pleased with the result, and definitely want to try more of that in the future.

The second thing I enjoyed with this one was how the textured overlay turned out. Only at the very end of the drawing process did I consider adding a texture, but man, I’m glad I did. It gives the piece more dimension and makes it feel even more dated.

Something I didn’t mention as I was blogging this month was all of the changes going on behind the scenes. There’s a reason for that–most of the changes only affected me. But in addition to writing, I made a bunch of changes to my blog this month.

First, I imported a lot of my old blog posts from elsewhere on the internet, and created a categorization system for them. If you go to the new “Old Blogs” category, you can see all of the content that I originally wrote in my other blogs, like my Blogger blog or my deviantART journal. Actually, you probably can’t see all of the content, because I’ve marked the vast majority of it as private. I want to preserve it for my own edification, but really, no one needs to see the bullshit that 14-year-old Spencer was sharing on the internet. Trust me.

I also added a bunch of smilies, the vast majority of which I made myself, back in the days when I had a forum of my own. Thanks to the wp-monalisa plugin, I can now easily insert emoticons like

in posts, and when you’re writing a comment, you can add those smilies too! I don’t use emoticons hardly at all, but I’m proud of the work I did on them, and figured it was worth embedding them in my site somewhere.

I spent a number of hours wrangling with custom plugins in order to create buttons in my post editor to wrap selected text in <cite></cite> and <code></code> tags.[ref]This seemed important.[/ref] Eventually, I gave up on trying to write the plugin myself, and settled for the Visual Editor Custom Buttons plugin, which mostly did what I needed it to.

Finally, the plugin I had been using for footnotes[ref]because, honestly, how could I blog if I couldn’t easily make footnotes?[/ref] turned out to be broken and out-of-date. I replaced it with the simply named footnotes, which was not either of those things. In the process, I had to replace all of my old footnotes with the new syntax, a task I completed by dusting off my knowledge of regular expressions. I’ll share the details in a later post. The end result, however, is that my footnotes don’t freak out when they’re included in a paragraph that contains a link. Also, they look a little nicer now.

Like I said, most of these are nearly invisible, but it just goes to show that even when I wasn’t writing posts for Blogathon 2014, I was still finding ways to tinker with my blog and make it more mine.

While I’m certainly not going to be blogging every two days from now on, I am going to try to blog much more regularly. Blogathon 2014, I think, gave me the oomph I needed to do that. There are a number of questions and prompts that I received this month that I didn’t get around to answering, and although I don’t intend to answer every submission, there were some interesting things in there that I want to address in future posts. Trying to think up content for 25 blog posts also unearthed a ton of subjects I’d like to write about, so I should have enough inspiration to carry me on for a while.

I am, however, looking forward to having free time that I don’t spend writing. I didn’t have hardly any of that this past month, so I’m eagerly anticipating the opportunity to unwind after work with a video game or a book. I enjoy writing, but it will be nice to have more options for amusement.

Like I said, I’m happy with Blogathon 2014, but I’m curious: what did you think? What was your favorite post? Did you enjoy this experiment? Did it make you more or less interested in checking out my blog? Any and all feedback will be welcome.

This was a good month. I’m glad I did this.

Like what I did with this blogathon? Want to give me material for future blog posts? Submit a question or prompt! That’d be cool of you.