With this post, I’m declaring the August 2014 blogathon over. I could probably try to squeeze in another hasty post, but you know what? It’s vacation, I’m in Moab, and it’s time to finish things up.

Naturally, I want to take a look at how this crazy experiment turned out. END_OF_DOCUMENT_TOKEN_TO_BE_REPLACED

Why… Why would someone choose to hang a Confederate flag across the rear window of their truck (safety concerns aside)? Aside from total obliviousness or outright racism, do you think there is any sort of justification for displaying one’s pride in the ideals of the South that could possibly outweigh the blatant discomfort caused in others by their (justified?) associations with that display?

END_OF_DOCUMENT_TOKEN_TO_BE_REPLACED

Hello! I got linked to your blog post on KoL by my girlfriend. I very much related to the mentality you share, like expecting free content online, and the sadness of the demise of something you tacitly took for a constant in a universe of variables.

Something I struggle with on my blog (enduringbeta.com) is who the audience is. What the focus should be. I’m curious if that’s a concern for you!

END_OF_DOCUMENT_TOKEN_TO_BE_REPLACED

When I lived in Japan, I took a lot of pictures. Over 5,000. Then, when I returned home, I did what everyone with a digital camera does these days–put them all on my external hard drive and forgot about them.

There are some really great memories in there, but there are also a bunch of pictures that I have absolutely no reason to keep, and have just kept around anyway. I’ll pull out the great photos and share their stories some other time, but today, I want to look at a small portion of the goofy, pointless, or just plain inexplicable photos from my time in Japan. END_OF_DOCUMENT_TOKEN_TO_BE_REPLACED

Which do you feel is more important for the future of humanity: the colonization of Mars or eliminating poverty?

Space colonization–in fact, interstellar travel–is one of those areas where I have to keep my views pretty close to the chest, in case the Nerd Police catch wind and strip me of my license. Unlike most folks I know who grew up on science fiction and love fantasizing about the new worlds, even galaxies, we may eventually reach as our understanding of the universe expands, I remain utterly apathetic to the idea of colonizing space. END_OF_DOCUMENT_TOKEN_TO_BE_REPLACED

Depression/Anxiety is a normal thing. You don’t need to medicate it. It’s part of life and a beautiful part at that. There are circumstances in our world that are extremely sad and depressing. As a human, it’s an honorable thing to allow oneself to feel that.
The Polish Ambassador

A friend of mine posted this quote on Facebook the other day. It comes from The Polish Ambassador, an electronic musician also known as David Sugalski. Over the years, I’ve lost much of my interest in bickering on Facebook, so I didn’t raise my objections there, but I have serious problems with this quote, and I can’t just let them go unvoiced. END_OF_DOCUMENT_TOKEN_TO_BE_REPLACED 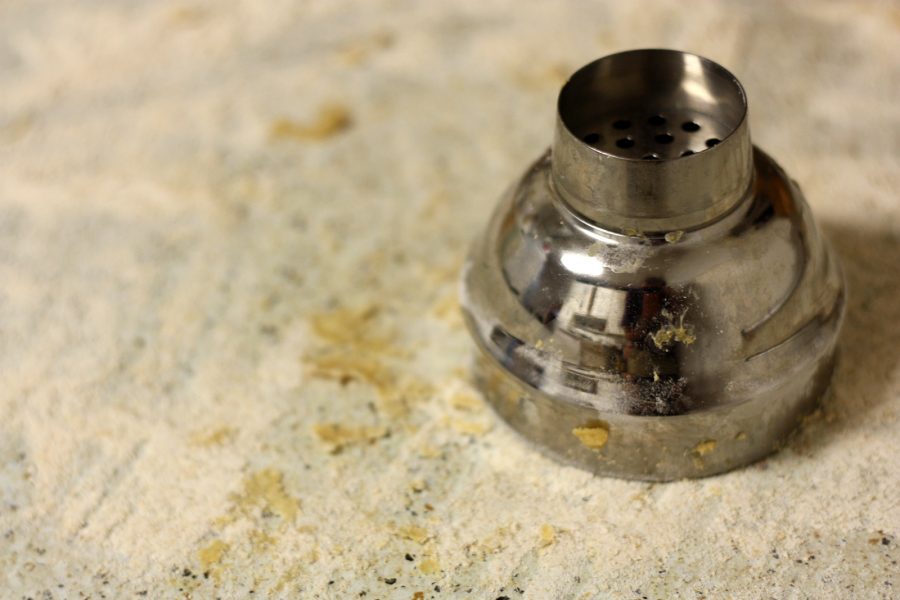 If you, like me, are better stocked for bartending than baking; and if you, also like me, love eating biscuits, you may one day find yourself in the difficult position of needing to cut biscuits from a sheet of dough but lacking a biscuit cutter.1At least, I assume I’m not the only person in the world to face this dilemma. Perhaps I’m wrong.

Provided you have a Cobbler shaker, there’s a simple solution at hand: 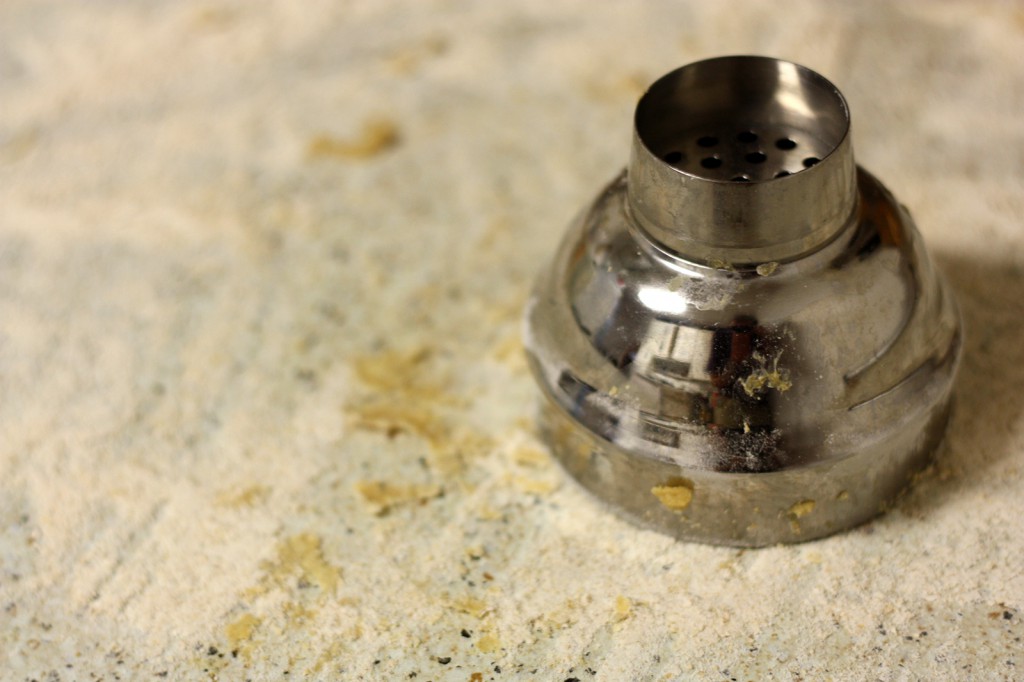 R and I cook in very different ways. One of us follows recipes to the letter, carefully measuring every ingredient and following every step in the directions. The other is far more improvisational, throwing ingredients in here and there and referring to recipes with nothing more than a cursory glance–if at all.

You get three guesses which one I am, and the first two don’t count.

The biscuit recipe I was following tonight said, for some reason, to grease a baking sheet and then sprinkle two tablespoons each of flour and cornmeal over the sheet, so I faithfully did that. I was running around trying to pull dinner together, so I didn’t stop to think about what a terrible idea this was.

Approximately 52 seconds after I stuck the biscuits, on the thoroughly floured and cornmealed sheet, into the oven, my kitchen was filled with smoke, and at that point, I began to consider that the recipe may have been slightly incorrect.

It’s been a week and a half since police in Ferguson, MO shot and killed Mike Brown, an unarmed black teenager. A week and a half later, and the system has devolved into a nightmare. Police responded to what were originally nonviolent protests with riot gear and military equipment and tactics. They’re using tear gas and firing rubber bullets. A curfew has been instilled. The Ferguson police seem to care little for the Constitution; peaceful protesters have reportedly been forced to stay on the move if they want to protest, violating their right to assemble, and police have arrested journalists and interfered with their work. It’s so bad that Amnesty International has, for the first time in its 53-year history, deployed a team of observers inside the United States–in this case, to collect information on what’s going on.

There’s so much that’s wrong with this. First and foremost is the blatant racism at work–Mike Brown’s murder was only the latest in a string of shootings committed by white Americans against young black Americans. Once again, America has proven that it views the lives of black teenagers as disposable, that they don’t deserve justice or fair trials, that they could be executed on the street by any white cop who thinks they look suspicious. It’s fucked.

Then there’s the terrifying amount of police power on display. This, like nothing else in the last few years, has illustrated how damn militarized our police forces have become–and what happens when you blur the lines between police and military. Seeing the police ganging up, turning on civilians, trampling on civil rights, and treating an American city like a warzone and American citizens like enemy combatants… it chills me to the bone. This is not how democracy works. This is not an acceptable use of state power. But this is what we’ve allowed to be built in this country.

All of this is weighing on me, and I feel an obligation to write a blog post about it; to write all of my remaining blog posts about it, but I don’t think that’s feasible. In lieu of that, here are a number of important links about the situation in Ferguson that you should read. END_OF_DOCUMENT_TOKEN_TO_BE_REPLACED

The diner was cozy, with brightly colored walls and shelves of knick-knacks between the tables. Behind us, an elderly couple griped about Obamacare over waffles. After placing our order with a waitress who (of course) called each of us “hon”, we turned our conversation to the subject of the last night’s concert.

We were in Eugene. R and I had traveled eight hours from Walla Walla in the middle of July–braving an un-air-conditioned car and hours, plural, of traffic’s glacial crawl–for a concert. This is not the sort of thing I typically do. In college, friends would rocket off on weekend trips to Portland or Seattle just to attend  concert, a notion I never quite understood. Barring a Carrie Underwood concert last year (which, really, was R’s idea), the last concert I’d gone to was The Decemberists, back in high school. Before that was Captain Bogg and Salty.

But this concert in Eugene was something special. The headlining act was the Goo Goo Dolls, who had provided musical accompaniment for the teenage years of not only me and not only R, but, I’m fairly certain, at least every suburban American kid born in the ’90s. Not everyone’s a fan, of course, and even I’d backed down from the days of Goo Goo Dolls on endless repeat, but the band nonetheless held enough cultural sway to draw us, a few members of R’s family, and thousands of others to their concert in this Eugene amphitheatre.

We were only a few words into our concert debrief when one of R’s relatives made the quip, “I sure wish he hadn’t said–” here she dropped her voice to a whisper–“fuck so much.” “He,” in this case, was frontman John Rzeznik, who, in true rock star fashion, had liberally peppered his between-song banter and anecdotes with the word.

R’s relative continued, dropping her voice to the point of being inaudible whenever she uttered the swear. “It was ‘fuck this’ and ‘fuck that’ and ‘fucking’… couldn’t he just use some different words? Expand your vocabulary!”

This is not about John Rzeznik, who, I’m sure, gives zero fucks. Nor is it about R’s relative, who’s only one of the many people I’ve witnessed expressing this complaint. This is about the unfairly maligned “fuck”, and the people who can’t fucking stand it. END_OF_DOCUMENT_TOKEN_TO_BE_REPLACED

I am not afraid of the bogeymen.

This summer, my landlord was arrested for possession of child pornography. My reaction was mixed. Revulsion, yes. Disappointment. Pity. That deep melancholy that accompanies a reminder of the world’s dark corners. I felt a lot of emotions, none of them happy.

But even on the day I found out, when I saw his pathetic mugshot and imagined how fundamentally unsettled the parents in our building must have been to hear the news, even when my blood was hottest, if you had asked me to grant the government wide-reaching powers to capture other people like my landlord… I would have said no.

Sexual predators. Pedophiles. Terrorists. These are the bogeymen they warn us of. “Beware,” they hiss, and they gesture at the dark, foreboding closet as their grip on our shoulder grows painfully tight.

I am not afraid of the bogeymen. What I fear is something else entirely. END_OF_DOCUMENT_TOKEN_TO_BE_REPLACED