I figured the right way to start this blogathon was by blogging about blogging, so I sat down and pulled up the post editor.

“Blogging,” I said, placing my fingers on the keyboard. “Right then.”

Curiously, a fully-formed blog post didn’t flow from my fingertips, so I started poking around in search of inspiration. I checked out my archives, and realized that my first blog was in 2004, a solid decade ago.

Ten years ago, I was a 13-year-old kid. My blog was where I posted all manner of minutia–recaps of my daily activities, mostly, at least when I wasn’t spewing vitriol about “society”. “Society” was practically a bad word to me, and I wrote rants dripping with contempt for it. (Years later, I’d graduate with a degree in sociology. Go figure.)

Needless to say, I’ve come a long way since then. And since I’m still trying to figure out the best way to write an interesting blog post about my blogging, let’s take a look at some of the things I’ve learned from ten years of blogging.1If “blogging” doesn’t look like a real word anymore, you’re not alone.

Not Everything Needs to Be Shared

When I got my first journal in 2005–a handsome book bound in orange leather and decorated with a stripe of rainbow stitching–I had what I thought was a brilliant idea. Why not put all of my journal entries up on the internet, so I could share them with my close friends? After all, plenty of people I knew did that by using their LiveJournals or Xanga blogs as repositories for their deepest, most intimate thoughts. I still wanted to write with pen and paper, but I could get the same effect by transcribing my entries and putting them online!

Since I was at the age where nothing was funnier than randomness, I’d named my journal “A Journal Named Exponents”. I started a blog on Blogger called “A Blog Named Exponents,” played with the theme to get a custom look I liked, and then began sharing the link with a very select group of friends.

Throughout middle and high school, I would bristle at the suggestion that I was full of myself, but looking back now, I’m beginning to suspect that A Blog Named Exponents might have had something to do with that impression. I treated it like an insiders-only club, doling out the URL only to the innermost of the inner circle. After all, what higher privilege could there be than reading my private thoughts?

But A Blog Named Exponents was more than just arrogant–it was a terrible idea. Originally, I held myself to the standard of uploading everything I wrote in my journal, unfiltered and unedited. I wanted to give my good friends access to the contents of my journal as if they were holding it in their own hands. As you can imagine, that backfired spectacularly.

My tempestuous teenage moods meant my journal entries contained a mix of angry rants and gooshy babbling about crushes. Even though Exponents was supposed to be shared with my closest friends, there were times when sharing those feelings was deeply uncomfortable. Before long, instead of doing the sensible thing and just not sharing my journal on the internet, I found myself monitoring and self-censoring myself when I put pen to the page. By making my journal public, I deprived myself of the safe private space it once represented.

Eventually, I came to my senses and stopped putting my journal on public display. Today, all the old posts from Exponents have been incorporated into this blog, though they’re all marked as private. Y’all don’t need to see them. Trust me. It’s better for both of us this way.

They Can’t All Be Brilliant

I have a very noisy internal editor, which makes writing profoundly difficult at times. I’ll have grand, lofty ideas about what I want to write, but as soon as I attempt to put them into words, my internal editor starts barking. “That’s not the word you want! This has nothing to do with your thesis! How can you write that? It doesn’t flow at all!”

There’s a place for editorial discretion, of course. I lacked it in my first few years of blogging, and as a result, my early blog posts were insipid and sloppy.2Okay, the fact that I was a teenager probably had something to do with that too. But too much of an editor brain can be a major hindrance, bogging me down with anxiety.

I still struggle with this–I failed miserably at NaNoWriMo last year because I couldn’t keep my internal editor from showing up every few words, like an anxiety-inducing Clippy. 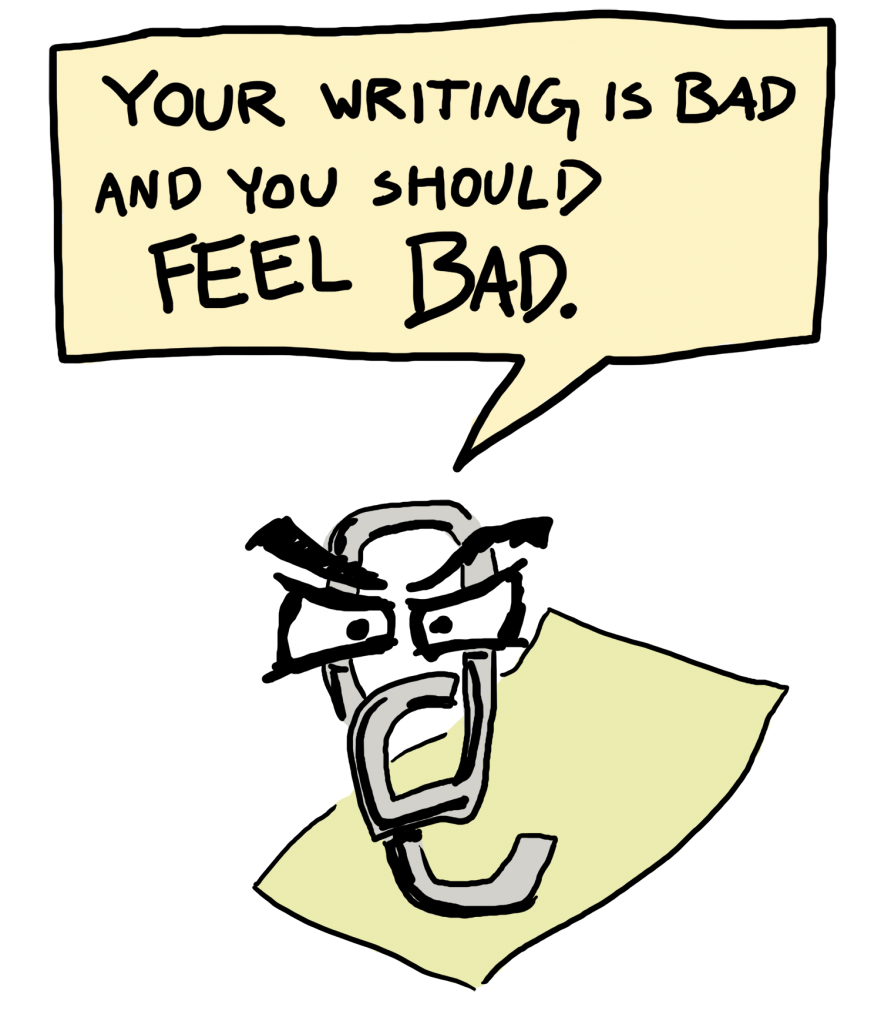 But since giving myself leeway to post whatever I want on my blog, rather than expecting careful, polished essays of myself with every post, I’ve felt far more comfortable in this space. My blog has actually felt like it belongs to me. Which, y’know, is important.

My internal editor3If I’m not careful, this is going to start sounding like Ana’s “inner goddess” from Fifty Shades of Grey, which is definitely not what I want. does an impressive job of convincing me that my writing is terrible. As tends to happen with my drawing as well, I fall into periods of not-writing, and the longer I go without writing, the more easily I assume that I just can’t do it. Verbal communication, I figure, is one of those gifts I simply wasn’t granted.

But that’s not really true. I can write. Sure, there’s always room for improvement, but despite sometimes feeling like it, I’m not a caveman banging on the keyboard with a rock. I wrote an advice column for a year. I’ve written a number of pieces I’m actually quite proud of, such as my newbie’s guide to designing Magic cards, or my post about dealing with crushes, or “Butterfly Dreams“, my freshman-year essay comparing Buffy to Rashomon. I actually can string words together in meaningful, sometimes entertaining ways.

I can write. Which is probably for the best, ’cause I’m going to be doing that a lot this month.