Just this week, Canada approved usage-based billing for the internet. What’s this mean? Now, Canadian Internet Service Providers (ISPs) can place caps on the amount of bandwidth subscribers can use, and charge them heftily for crossing that cap. While this may make sense in the abstract, the implementation is where it’s all shot to hell: Bell Canada is switching to an incredibly low 25GB monthly cap, and is charging almost $2 for each gigabyte past that cap. (The cost to Bell to deliver a gigabyte of data is far less than a penny, for reference.)

This is bad in so many ways. END_OF_DOCUMENT_TOKEN_TO_BE_REPLACED

According to numerous sources, last night, outside a political debate in Kentucky, a group of Rand Paul supporters threw a MoveOn member to the ground, incapacitated her, and one person stomped on the back of her head.

You read that right. Stomped on her head. 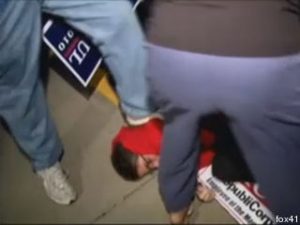 So, let’s be clear here, America. Maybe there’s been some confusion as of late. Not many people have stood up and opposed this sort of behavior. We’ve kind of let it slide. END_OF_DOCUMENT_TOKEN_TO_BE_REPLACED

Let’s say you’re a parent. Let’s say that one day, under pressure from a bunch of acquaintances who are convinced you’re doing something wrong by neglecting to do this earlier, you start giving your child dessert every night– not only that, but expecting her to eat it. You keep the practice up, night after night, and you see no harm in it, since she seems perfectly happy with it.

Your daughter grows up with this practice. One day, when your daughter is fifteen or so, a friend points out to you that expecting your daughter to eat dessert every night is definitely a bad parenting choice. It’s bad for her health, it fails to teach her how to act with responsibility– in short, it goes against many of the values you had when you became a parent. In light of this, you decide to stop making her eat dessert every night, and instead, to keep sweet options available without pushing them. Your daughter can choose to eat dessert, but you’re no longer pushing it on her. From your perspective, and from the perspective of an outside observer, you’re respecting her right to do what she wants, giving her options while remaining consistent with the beliefs you hold dear as a parent.

Your daughter, though, has grown up expecting this. She hasn’t been unhappy with it; her whims have been catered to for a good chunk of her life. She expects that you’ll provide her with dessert every night. To her eyes, what you’re doing is not an exercise in liberty, in fact she it as the opposite. She feels entitled to her dessert every night. What happened? She was given a privilege so long she began to view it as a right.

This, in a nutshell, is the National Day of Prayer. END_OF_DOCUMENT_TOKEN_TO_BE_REPLACED

I am not currently a happy Spencer.

For a month or so, I have been trying to find a job. It’s summer and I’m about to be a college student; there are things I really need to pay for and pay off. Among the items at the top of my list are a new bicycle and a number of accessories for it, as well as various items for my computer, new clothes… the works. I could definitely use a bit of an income, for a number of obvious and logical reasons.

Unfortunately for me, it feels as though there are a million and a half things stacked against me. For starters, I have no experience. I’ve been so busy being a high-achieving high school student in the last four years that I haven’t actually had time to hold a job. This is problematic by itself, but when coupled with the current state of the economy, it’s downright nasty. END_OF_DOCUMENT_TOKEN_TO_BE_REPLACED

I see you every day, walking down the street in your heavy black jackets or your baggy skater clothes. I’ve watched you angrily kick over the sign of a local business simply because it was nearby. You’ve shouted at my car, “What the fuck are you looking at?” when I took a look at you to see if I recognized you. You’ve tried to break into my theatre department late at night, and almost succeeded.

So what haunts you? END_OF_DOCUMENT_TOKEN_TO_BE_REPLACED

What’s happened to our conversation? We’ve become a bunch of spineless, light-footed lemurs, afraid to say anything that might step on someone else’s toes or offend anyone else in any way at all. All of us. We’re caught up in modifiers and justifiers, constantly making excuses in order to keep ourselves from pushing people too hard.

It’s too late at night to come up with examples, but watch your discourse with others. Watch others’ discourse. We’ve become ridiculously self-censoring, myself included.

I’m not advocating going out and being rude, that’s absurd. Manners have their place. But there are manners, and then there’s simply regularly cutting your feet out from under you, and the latter is happening one hell of a lot.

Random thought of the night.

You see, the funny thing about other people is that they’re human.

Everyone messes up. Everyone has faults; everyone makes mistakes. And when they do, they often inadvertently end up causing someone else grief. It will be you at some point in your life. It may be you often in your life, if that way land the dice.

We get frustrated with the things other people do. We look at them and say “Oh my God, why can’t you just X?” or “Jeez, why do you Y?” But how many times have you been on the other side? How many times have you used the defense, in your own head or out loud, that you’re only human, or something to that extent? The fact of the matter is that sometimes people mess up. END_OF_DOCUMENT_TOKEN_TO_BE_REPLACED

Having been home for a week, I figure I ought to actually write something of content. Here it is.

On July 5th, 2007, I left Portland, Oregon at 7:30 am with a group called People to People. I boarded a plane, which ascended above the clouds and flew for an hour before landing at San Francisco International Airport.

After a 4-hour layover, I then got on a bigger plane and took a ten-hour flight… to Japan.

I spent two weeks in Japan, traveling all around the country. I saw the unbelievably large megacity of Tōkyō, and experienced the slow life in the little community of Hirado. I discussed world peace with students my age at the Nagasaki Atomic Bomb Memorial Museum, and walked around downtown Kyōto as preparations for a summer festival were being made. I spent two nights living with generous homestay families. The trip was amazing beyond belief, to the extent that the first word I use to describe it when someone asks is always “life-changing”.

And now I’m back in the United States, and it’s horrendously difficult to readjust, partially because there’s so much that I simply can’t take for granted anymore. END_OF_DOCUMENT_TOKEN_TO_BE_REPLACED

Being who I am, I figured I’d address some of the most prevalent myths. With the aid of Snopes.com and Google, I bring you three of the most common urban legends.