There’s a song from the musical Avenue Q called “Mix Tape”. In it, one character, Kate Monster, receives a mix tape from her charming neighbor, Princeton, and agonizes over the meaning of its contents:

“I Am The Walrus”
“Fat-Bottomed Girls”
“Yellow Submarine”

What does it mean?

This post’s not about Avenue Q (although if you haven’t seen Avenue Q, I strongly encourage you to check it out the next time the opportunity presents itself). Instead, I want to use this as an example of what I’d like to dub the “Mix Tape Mindset” about crushes, ’cause I think it’s a very silly cause of an unfortunately large amount of unhappiness. END_OF_DOCUMENT_TOKEN_TO_BE_REPLACED 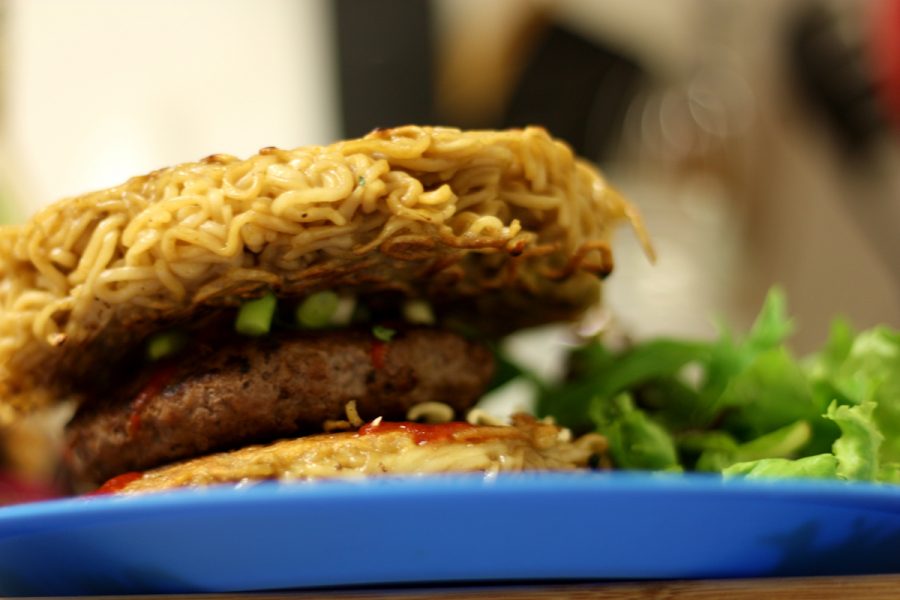 About a month ago, news of a seductive new culinary sensation hit the internet. Chef Keizo Shimamoto debuted the ramen burger: a hamburger between two buns made of cooked, pressed, and fried ramen.

Naturally, the internet went crazy. Myself included. So last week, after some searching for recipes, I decided to make my own. END_OF_DOCUMENT_TOKEN_TO_BE_REPLACED 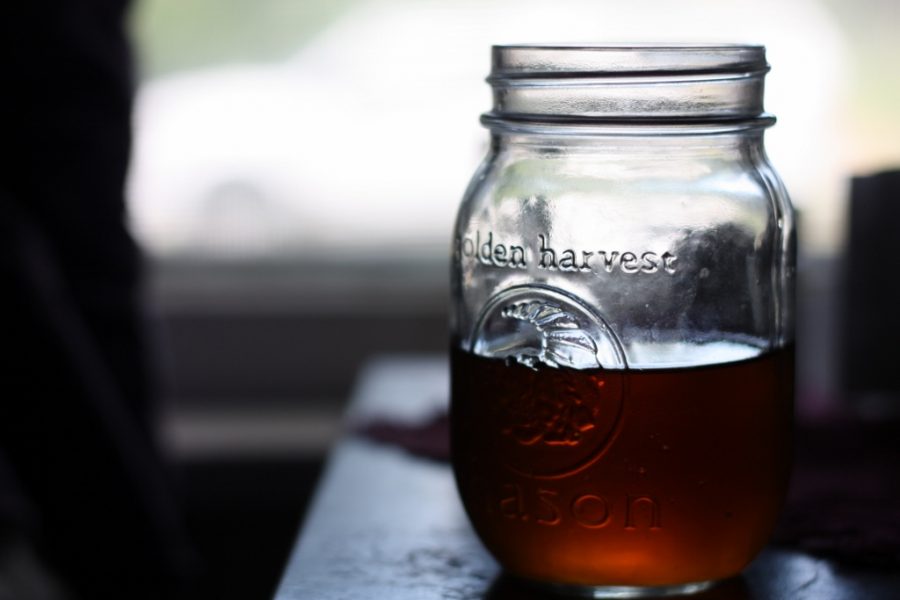 My new camera lens–the Canon EF 50mm f/1.8 II, affectionately dubbed the “Nifty Fifty”–arrived today, and I wanted to share a photo I took with it. Also, I made some really tasty tea yesterday. So the photo’s at the top, and the tea recipe is below.
END_OF_DOCUMENT_TOKEN_TO_BE_REPLACED

A month or so ago, as part of a joint field trip with my Lenses of Culture and Waste and Pollution classes, we went to Osaka to visit the Osaka Human Rights Museum. Organizing thirty American students and getting to Osaka, about an hour away on the train, was an interesting (read: hair-tuggingly frustrating) experience, but when we actually got there, the museum was quite the sight. END_OF_DOCUMENT_TOKEN_TO_BE_REPLACED

The Art of Comics

I was never a comic book kid. When I was growing up, I read the funnies in the newspaper, and for a short time, a little of Ranma ½. I would pore over anthologies of newspaper funnies, but without too much refinement of taste; at the time, I loved the beautiful Calvin and Hobbes just as much as I loved stale old Garfield. That was the extent of my exposure to comics, though. I never peeled open a Batman or a Superman story, and didn’t really give professional comics much thought. END_OF_DOCUMENT_TOKEN_TO_BE_REPLACED

My schedule’s a pretty nice one– I’m taking Elementary Japanese, Encounters (the mandatory first-year humanities course), Social Problems (a sociology class), and Intro to Visual Arts Practices. I’m happy to point out that there are absolutely no math classes in this semester’s lineup. After Calculus II last semester, I’m rather burnt out on math. I’m not sure if I’m done for good, since that depends on both my future whims and the requirements of whatever major I settle on, but I’m done for right now, which is a relief. I’m also fairly lucky with regards to how the week pans out: three days a week, I only have two classes, and am out by noon! Of course, the tradeoff here is that on Wednesdays, all four of my classes meet… but I think I can manage that. All of these courses seem really interesting.

Today I had two classes: Japanese and Social Problems. Japanese was great, as always–Professor Takemoto is an animated and engaging professor, and he helped us brush the dust off, as it were, and start speaking the language again. He also distributed the packet of kanji characters we’ll be learning this semester, which contained quite a few beautiful characters containing strokes and radicals I’ve never seen before. We’re also, unexpectedly enough, reading a 2006 novel in class this semester. It’s an English novel, but it’s by a Japanese-American author, and it has a lot to do with Japanese culture. All in all, I’m looking forward to getting back into the Japanese groove.

Social Problems was interesting as well; the class is large, but there are a lot of people I know on the roster1Large by Whitman standards, that is. It’s about 30, 35 people. I love small schools.. We started by discussing what constituted a social problem, and whether or not cultural/demographic perspective had anything to do with what we classified as social problems. Our first text is entitled Gang Leader for a Day, and it follows a young sociologist as he integrates himself within and observes a Chicago crack gang. We’re also reading texts on the criminal justice system, inner-city poverty and crime, and juvenile crime. Looks like there’s a common theme here, but I don’t mind. All the texts sound fascinating. Also, oddly enough, the class isn’t going to meet this Thursday because the professor will be out of town, so I’ll have only one class that day. Awesome!

Other parts of campus life have been similarly easy and enjoyable to readopt, such as living in the dorms. My section met last night, and our new RAs introduced themselves. Although they might not have quite the charisma as last semester’s beloved Daichi, Hayley and Bailey seem to be a couple of pretty cool characters. Bailey also mentioned, as he spoke to us, that while sections usually get smaller at semester breaks, as students change their housing situations, 4-West actually got bigger–so big, in fact, that his room is actually in 4-East, the neighboring section. Like I mentioned before, I’m really proud to be part of a section that’s got such a strong family vibe.

I’ll write some more about school when something more interesting happens here.

I’ve upgraded the blog’s version of WordPress yet again, and given it yet another snazzy new theme. This theme is still getting some wrinkles ironed out of it; hopefully, within a few days, it will have a cooler, more personalized header image, and maybe a different color scheme.

Also of note are some new sidebar gadgets! You can read my latest Twitter posts, browse the blog through tags, or view some quotes I particularly enjoy1To reload a new, random quote, click the quote box., all along the right side of the page.

I’ve also spent some time trying to clean up redundancies within categories and tags. I’ve pared down the list of categories (you can see them in the top right of the page), and resorted to tags to define other categorical things. For instance, all political posts are tagged with “politics,” rather than put in a “Politics” category. Of course, this makes no difference to anyone but me.

Permalinks now work again, so you can make pretty bookmarks that look more like this:

Finally, the blog has been moving around a bit lately, but this should be its new home for good (or, at least, for a considerable time). You’ll notice that the URL has nothing to do with the title of the blog. That’s because I may change the blog’s title in the future, but I really don’t want to mess up everyone’s2I say “everyone,” but I mean “the three people who read this blog.” links again.

What an interesting few weeks it has been.

I haven’t been able to blog lately due to some connectivity issues– when I’m on my local network, I can’t, for some reason, access the blog. Right now I’m leeching connection from my neighbor, which is why I can post. I’d love to get this fixed, but it may require a new URL for the blog. I’ll keep you posted.

Unfortunately, since it’s 12:37 on a school night, I don’t have time to write about everything that’s happened. I had an amazing but unorthodox Christmas and New Year’s, we got tons of snow, and– oh yeah– I got accepted to Whitman College, my top choice for schools. I’m psyched.

Also, in a slightly more materialistic vein, I received tons of awesome presents for Christmas. Individual thank-yous will come later, but I want to thank everyone who gave me such thoughtful, exciting gifts. From what I’ve seen amongst family and friends, it seemed like everyone gave good gifts this year, coincidentally enough. I’m fairly certain I made a good few people happy with my gifts, which is a wonderful feeling. It was also great just to bond and hang out with family and friends. Thanks, everyone.

Since I had a great Christmas, I don’t want to add too much to my birthday wishlist (oh, by the way, I magically become an adult in less than three weeks), but every so often, something strikes me that I’d simply adore to receive.1insert obligatory apologetic statement here about not wanting to be greedy or ungrateful. I don’t want to be that way at all– but I also realize that I probably apologize way too much for things that aren’t even problems except in my own crazy mind. If the addition to my wishlist offends you, please consider this apology. Right now, that thing is Doctor Horrible merchandise– specifically, the DVD and the soundtrack. If you haven’t checked it out, take 45 minutes out and watch it. It’s a short musical-comedy-tragedy that was written during the writer’s strike by Joss Whedon, writer of Buffy the Vampire Slayer, and stars Neil Patrick Harris as a low-rent supervillain who’s trying to make his way up (down?) in the world, but also wants to win the attention of the girl of his dreams. It’s fantastically witty, very catchy, and moving (at least for me) at the end. It’s not a paragon of excellence that will set the bar for generations to come, but it’s damn good entertainment for 45 minutes. Check it out.

Anyway. I’ll try to blog more this year, as life is about to get very interesting, and I’m sure that the Internet wants to hear about nothing more than it does my life.

I’ve just got to get this connection thing fixed first.